A predominantly residential region, with over 300,000 people – that’s 24% of the population of Greater Adelaide – living on the 10,000 hectares (59%) of land zoned for residential use. 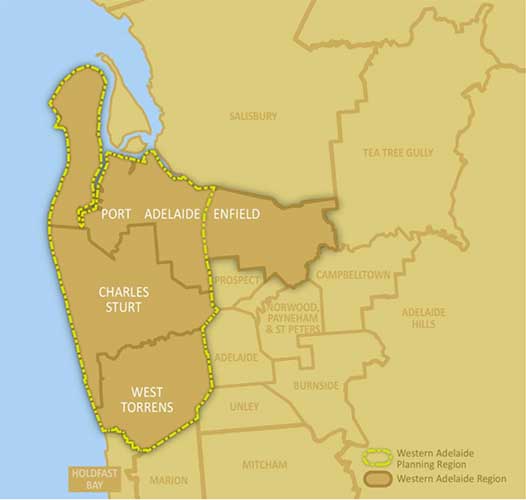 The critically important base for much of South Australia’s key infrastructure: Adelaide Airport, the port and wharf facilities, West Beach Waste Water treatment plant and the Torrens Island and Pelican Point power plants; as well as significant industries such as Adelaide Brighton Cement, Shell Bitumen Plant and Adelaide Submarine Corporation.

Approximately 1,400 hectares (or 8% of the Region) comprises open space, (parks, reserves and outdoor sporting areas), less than other metropolitan Adelaide regions. Key environmental assets located in the Region include the beaches along Gulf St Vincent and dunes at Tennyson and Semaphore, as well as the River Torrens, Port River estuary and mangroves at Mutton Cove and the Barker Inlet. These open space and natural areas provide important habitat and biodiversity, contribute to the health and wellbeing of residents and visitors and contribute to the character and amenity of the Region.

There is considerable diversity in incomes and qualification levels across the Region, with pockets of high-income households in some places, and concentrations of income-support recipients in others. The Western Adelaide Region has higher rates of self-assessed fair or poor health, and above-average proportions of people requiring assistance with core activities.

Comprehensive detail regarding the economic, social and environmental characteristics of the Western Adelaide Region can be found in the AdaptWest research papers.

More about the Western Region ...

Between city and coast, home to over 270,000 people, a haven for unique marine flora and fauna, a business hub and major centre for South Australian industry and crucial infrastructure – the special challenges and unique resilience of Adelaide’s western community.

The Western Adelaide Regional Adaptation Priorities Action Plan ‘sets the pace’, and establishes opportunities according to specific locations within the Western Region.

The busy and beautiful Western Adelaide Region is already experiencing extreme and hazardous climatic events, such as flooding from intense rainfall, storm surge and heatwaves. But Adelaide’s West has a plan.

The western suburbs of Adelaide, South Australia lie between the city and its beautiful, busy beaches and ports along the coastline of Gulf St Vincent.

Fill out the form below to get in touch with an AdaptWest representative.

Select the checkbox to sign up to the AdaptWest newsletter.