Why should we care about the rising temperature, rainfall and sea level projections for the Western Adelaide Region? What are the implications for our lifestyle, safety, property values and our unique environment? And who’s doing something about it?

The combined effects of sea level rise, storm surge and high volumes of stormwater runoff following high intensity rainfall events leads to significant inundation of land, transport routes and commercial and industrial buildings. This has implications for the ongoing operation and viability of current business and industrial areas as well as those planned for potential future industrial development, particularly areas surrounding the Port River Estuary. Small businesses are more vulnerable as they may be less aware of the hazards that may challenge their business, have lower capacity to alter their operation or practice and have lower levels of insurance.

A number of investigations have been undertaken to better understand the impact of increases in rainfall intensity and sea level rise on the Port River Estuary. The Port Adelaide/LeFevre Peninsula Port Adelaide River Seawall Study estimated the potential damages from the combined impacts of sea level rise and land subsidence and recommended seawall infrastructure upgrades. While many buildings in the Port River Estuary may be at risk of inundation in the future, some facilities such as the Australian Submarine Corporation have been constructed considering future sea levels.

Climate change will impact estuarine waters by increasing the risk of poor water quality, especially due to algal (cyanobacterial) blooms which will be encouraged by warmer conditions and input of nutrients from stormwater runoff from urban areas as a consequence of more intense rainfall events. Current measures to maintain the amenity and function of estuarine waters are focused on managing stormwater inflows and restricting impacts on existing biodiversity through designated protected areas including the Adelaide Dolphin Sanctuary, the Barker Inlet-St Kilda Aquatic Reserve, Mutton Cove Conservation Reserve and Torrens Island Conservation Park.

Natural coastal landscapes are valued environmental, community and economic assets to the wider community contributing to its amenity and character. Vegetation on the coastal dunes at Tennyson and Semaphore Park provides habitat for birds and animals, stabilises the sandy dunes and provide natural protection for the built assets behind. The coast is also valued for providing opportunities for recreation and community events, as well as being a popular tourist and visitor destination. Beaches and dunes will erode as sea levels rise. The Adelaide Living Beaches strategy is a major part of the current action to protect and enhance natural coastal landscapes. Beach replenishment and construction of coastal structures to slow sand drift are key components of the strategy.

As annual rainfall declines, rainfall intensity increases and the sea level rises, Local and State government agencies and developers have invested in a number of plans, policies and on-ground works that improve the management of stormwater and mitigate flood risks. Waterproofing the West, a major initiative of the City of Charles Sturt, has resulted in the construction of diversion systems that allow additional stormwater to be directed to wetlands for treatment and aquifer storage. Although these actions contribute to the adaptive capacity of the Region’s stormwater infrastructure, the Region’s stakeholders identified that more work is required to improve stormwater quality and flood mitigation as the climate changes in the future. 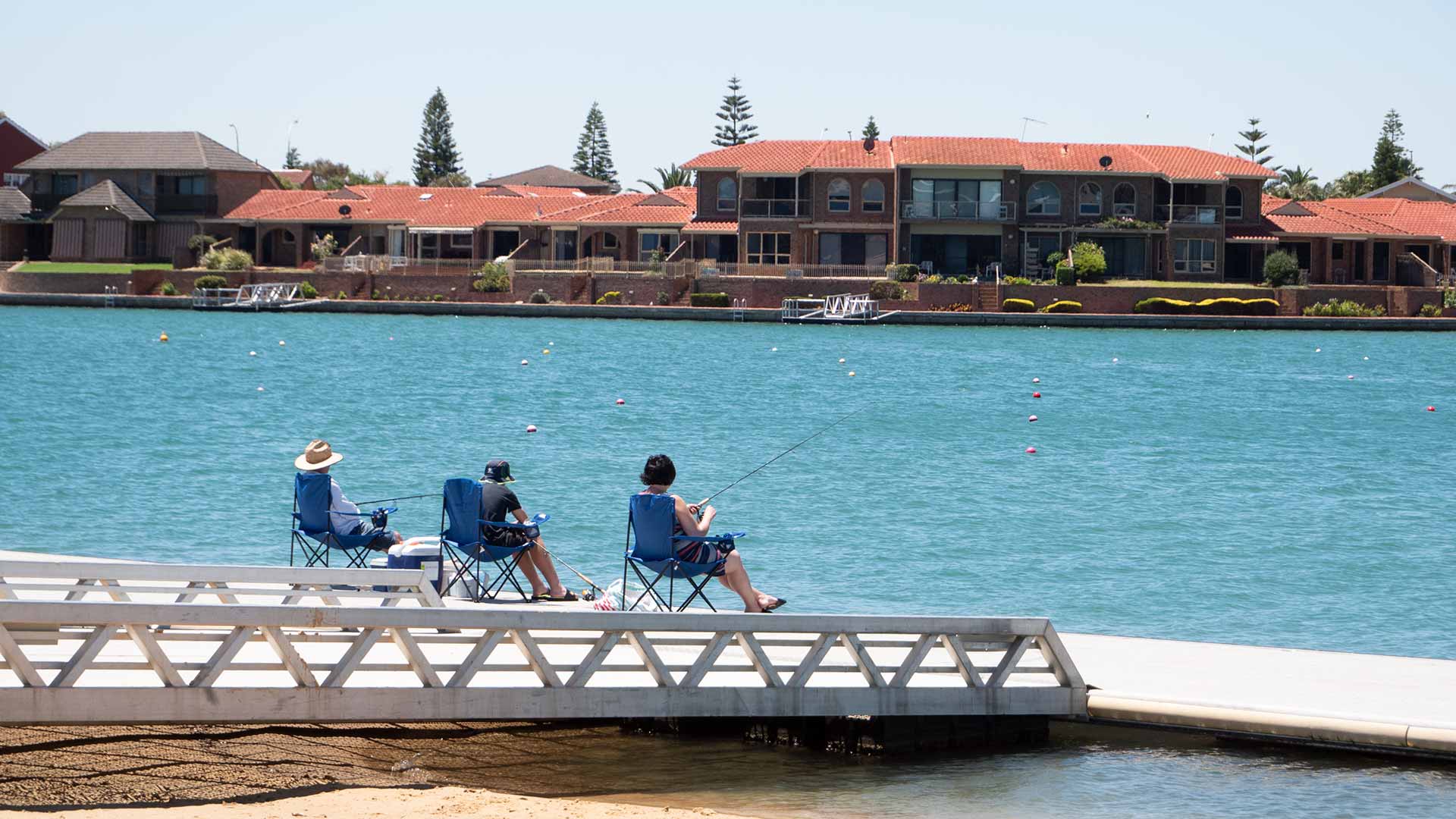 Much of the Western Adelaide Region is highly urbanised, with the predominant land use being residential. Urban density will increase in coming years as the Region is earmarked for further urban development (the majority of which will be infill) and population growth. Climate change will influence the amenity and liveability of urban areas. The condition of older houses may decline as reduced rainfall increases the risk of soil heavage and lower floor levels may be inundated by flood or sea water/storm surge. Increasing frequency of salt water inundation may impact soil stability and underground infrastructure with subsequent impacts on building and vegetation condition. Water quality in West Lakes will be impacted, increasing the risk of poor water quality, especially due to algal blooms which will be encouraged by warmer conditions and input of nutrients from stormwater runoff as a consequence of more intense rainfall.

An immediate priority adaptation option for completion within the coming 5 years is to amend land use planning policy regarding finished floor levels (see figure 10 below). This will ensure that new buildings constructed in areas at risk from flooding caused by more intense rainfall events as well as storm surge will be protected. 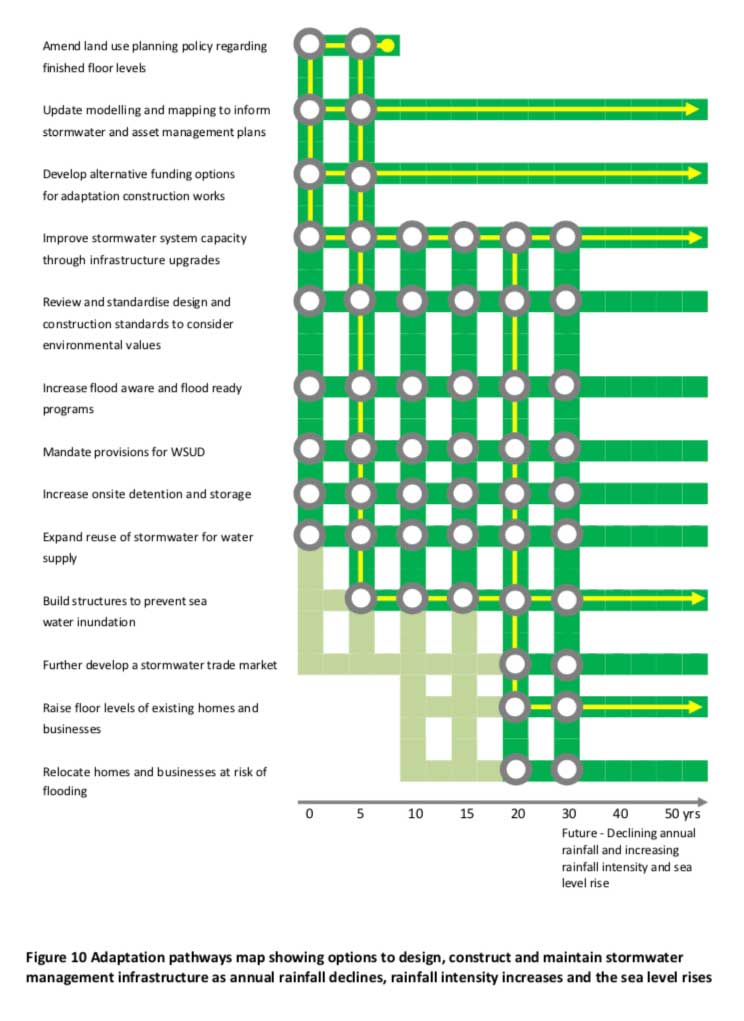 More about the Western Region ...

Between city and coast, home to over 270,000 people, a haven for unique marine flora and fauna, a business hub and major centre for South Australian industry and crucial infrastructure – the special challenges and unique resilience of Adelaide’s western community.

The Western Adelaide Regional Adaptation Priorities Action Plan ‘sets the pace’, and establishes opportunities according to specific locations within the Western Region.

The busy and beautiful Western Adelaide Region is already experiencing extreme and hazardous climatic events, such as flooding from intense rainfall, storm surge and heatwaves. But Adelaide’s West has a plan.

The western suburbs of Adelaide, South Australia lie between the city and its beautiful, busy beaches and ports along the coastline of Gulf St Vincent.

Fill out the form below to get in touch with an AdaptWest representative.

Select the checkbox to sign up to the AdaptWest newsletter.